How to lift a motorcycle - The ultimate guide

Motorcycles are inherently unstable vehicles when stopped or at low speed, and as such, letting a motorcycle fall and having to pick it from the floor is bound to happen sooner or later.

The real question is, do you know everything you need to on how to lift a motorcycle off the floor?

There are many techniques, many questions, and some undisclosed notions about this topic, and today, I will try and guide you over them, creating the Ultimate how to lift a motorcycle guide.

The first step before anything else is knowing when you should let your bike fall.

Yes, at some point, you should indeed let your bike fall, and the reason for it is quite simple.

I’ve been teaching big adventure bikes and dual-sport riding for years, and there is always one topic I spend quite a bit of time debating with my students: Self-preservation

Self-preservation comes in many forms, from energy conservation to falling down situations.

This being, I would divide that sub-topic in two:

But where is the maximum tipping point?

This being, what happens 99% of times, is that you put your foot down, the bike starts tipping, and you start opening your leg trying to push the foot outwards in an attempt to stop the bike's motion. 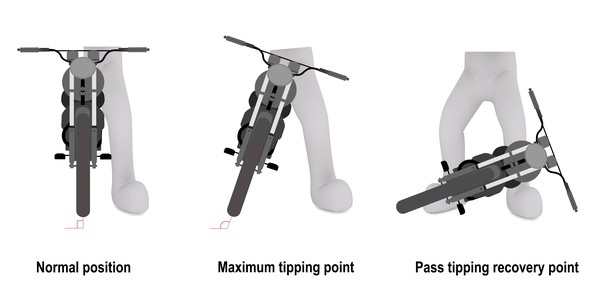 Although the maximum tipping point varies depending on many factors, like your height, strength, bike’s weight, and CG to name a few, it is something that you instinctually feel.

Getting to that point, if instead of continuously trying to keep the bike up, you guide the motorcycle down, more times than none you will remain upright with the bike on the floor with little more than a couple of scratches.

In my classes, we always had bikes for students to feel what it is like to reach the maximum tipping point, on, and off the bike.

You can do the same exercise with your own bike if you remove the mirror and lay a nice layer of rubber mats on the floor before purposely tipping over the bike on top of them.

I’ve also had success doing this with tires on the floor instead of mats.

If you decide to do this test, I suggest that you do it with a friend or two, not only to help you guide the bike down, minimizing damage but also to help you pull it back up.

So in summary, the best way for you to stop the bike from falling is not by preventing it from actually falling, but by stopping yourself from getting hurt in the process.

Now that your bike is down and you dusted yourself off, time to get it back up!

The first thing to keep in mind is that there are techniques to get motorcycles off the floor, that you should learn them, and that in none of them, brute force is vital.

This being, being too small, or too weak, is not an excuse.

With the right technique, everyone can lift a motorcycle.

On all of the examples above, although featuring big and heavy bikes, you can see that it is not hard to pick them up.

But there is one hidden secret to that!

Either because of the engine and fairing, the panniers, or both, the bikes aren’t flat on the ground, and that plays in your favor in two ways:

This last point is crucial for an easy pick-up.

As you can see from the image above, the bike presents itself in a similar position to the ones from the videos.

This means that the wheels are touching the ground or close to it, with a pivoting point somewhere around the middle of the bike.

That point allows for the only actual lifting to be done, to be when pivoting the bike until both wheels are on the ground.

A rather effortless move for most cases.

Once the wheels are grounded, you can apply techniques like the ones shown above to lift it rather effortlessly. 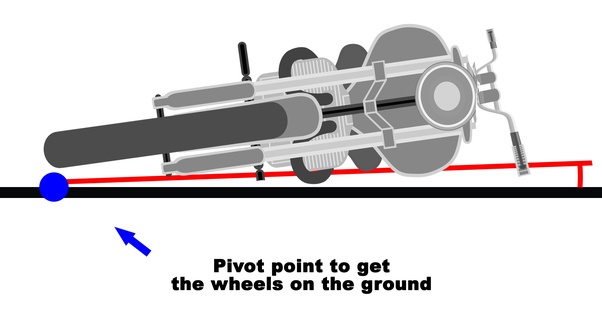 On this image, you can see that the bike lays flat, forcing you to deadlift the entire motorcycle until you can get the wheels on the ground, as the pivoting point will be the wheels themselves.

This maneuver will require a lot more effort on your part, and some brute force may be necessary.

If you try any of the techniques in the videos without the wheels on the ground, there will be no friction between the tires and the floor.

That means you will never make the bike upright and will end up dragging it, instead of lifting it.

You need the wheels down to get the bike up, after all, bikes stand on their wheels.

This being, the actual weight of the bike is not necessarily what makes it easy or hard to lift; what makes it difficult is the position in which the motorcycle stays once on the floor.

As another example, if on the second video he removed the panniers from that F800GS, that entire maneuver would be harder because the bike would lay flatter, and he would have to deadlift it until the wheels would be touching the ground.

Big bikes, tend to be bulkier, and as such, will generally never tip over into a position where their wheels are stuck belly up.

For most cases, with big bikes, you will always have a pivoting point to help you get the wheels on the floor, making it easier to lift than much smaller and slimmer bikes.

Also important to remember, is that all that we discussed here, is for situations where you need to lift the bike alone, which will only happen if you find yourself in the middle of nowhere.

If you can't lift your bike, regardless of how small or big it is, you shouldn't be riding alone in remote locations to start with.

So at the end of the day, it's not about how big the bike is, or how strong you are, it's just physics, technique, keeping calm, and applying common sense, and f it all fails, ask for help, until this day I've never seen anyone deny help to get a bike off the ground.